Just a little update - Been away for a couple of weeks with sick baby and little sleep. Still progress is being made on the Dungeoneers front with character creation essentially finished minus a little polish. Here is a shot of the race selection step, should have an update with new information on Classes next week. 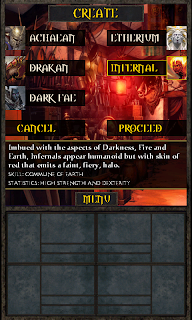 Posted by Monnster at 4:50 PM No comments:


Racial choice in Dungeoneers affects the following aspects of character creation:
- Portrait Selection – Specific racial portraits will be available for male and female versions of each race.

- Racial Skill – Each race will have a single race-specific skill added to the PC’s skill list.

- Starting Statistics – The chosen race will determine the starting values for the core pc statistics.


Five initial starting races will ship with the game including the Achaeans (Human), Drakan (Dragon-kin), Infernals, Etherium, and Dark Fae.


The human race of the world of Achaea is the predominant life form in a land populated by a plethora of varied races.


The ancient race of the Drakan, a slave work force created by the dragon lords of the last age, appear as a muscular bipedal human with a powerful tail, covered in resilient fire-resistant scales and the broad often horned head closer in appearance to their dragon creators.


Beings of inherent magical power believed to be born, along with their Etherium brothers and sisters, to protect the mortal plane from the Dragon Lords tearing it apart in the last age. Imbued with the aspects of Darkness, Fire, and Earth, Infernals appear dark in both appearance and disposition. Though outwardly humanoid their skin is colored from red, to grey to ruddy brown and often covered in bonelike protrusions, horns and scales.


Beings of inherent magical power believed to be born, along with their Infernal brothers and sisters, to protect the mortal plane from the Dragon Lords tearing it apart in the last age. Imbued with the aspects of Light, Water and Air, Etherials embody life and light. Outwardly humanoid their skin is colored ussually in pale white and blues touched by an otherworldly glow. As Etherium age they slowly begin to grow white feathery wings from their backs, though few are known with the ability to fly. However their numbers are far less than their brothers the Infernals due to their near extinction at the beginning of the age by the order of the Mad King Malagant.


Masters of Terrestrial magic (Matter, Mind and Illusion) it is believed this ancient race were the originators and teachers of magic in Achaea before the birth of the Celestials and Celestial magic in the last age. Good humored and kind, the Dark Fae are Dark only in name and appearance and played a great part in protecting the human race from extinction during the Dragon Wars. Dark Fae generally stand half the height of the average human, with thin spindly limbs, deep purple skin and large black eyes. Dark Fae are winged creatures and take great pride in the beauty and varied colors and patterns that grow and change on their wings throughout the course of their long lifetimes.

Email ThisBlogThis!Share to TwitterShare to FacebookShare to Pinterest
Progress update for this week - Town continues to progress with the Inn, City Gates and the Barracks the priority right now. A lot of changes in to support character creation. Character creation menus in progress.

Goals for the next week - Finish character creation. Polish Inn, Gates and Barracks.

Weekly update right after this will include details on the 5 starting races in the game.
Posted by Monnster at 8:48 PM No comments:

New screenshots added to the slideshow on the right. Great thanks to Nathan Rinehart and Maury Weiss for their contributions on the art so far! Please note most of the art in these builds is not final, including the borrowed 'Baldur's Gate' portraits and the Town screens.
Posted by Monnster at 6:34 PM No comments:

Email ThisBlogThis!Share to TwitterShare to FacebookShare to Pinterest
Years Later...

Dungeoneers development is still going strong, despite my poor blog updating skills. In the past couple of years the game finished the prototype phase and I then re-wrote nearly every system, cleaning up the code and expanding and solidifying the design. It has been a long journey, but Dungeoneers is now nearing a release window and the game is in a 'playable' end-to end state. Final art, sound and some final systems still remain to be done, but there is a light at the end of the tunnel. I am committed to one blog update every week from here to release. When might that be? Well I have some internal goals but lets just say 'when its done.'

This week I will be posting a bunch of new screens.

Hope you will join me for the journey and let me know your thoughts.
Posted by Monnster at 5:57 PM No comments:

Hello! I will use this blog to communicate and share screenshots and idea's with folks also working on the project. I want to start out with posting the background and description for the game so people can hopefully get a feel for the theme. Please comment! I look forward to working with those I have only briefly or never met - and thanks Nato for putting me into contact with more talented artists like yourself.
Here is a shot of the new tileset we worked on last night. Good stuff.
Monnster. 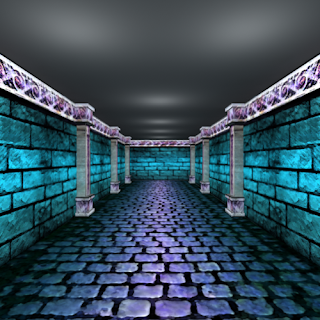 
Achaea is a land emerging from a great darkness.  A new King has replaced the old and brought hope once again to the land. But long before this new King, the Dragon Lords ruled Achaea. They warred with each other for countless centuries with no regard for the races they trampled beneath their claws. The Drakan, part man, part dragon, were birthed during this time as warriors and slaves to be used in their Dragon master’s unending schemes and battles. Life for the Achaeans, the predominant human-like race of the land, was one of grief and poverty during the Dragon Wars. Organized cities and towns were frequently crushed between the armies of the Dragons so those with an eye to survival fled to the dark hidden corners of the world.


The fae-folk, or “Dark Fae”, as they were once called to scare children in bedtime stories, were the surprising and staunch allies of the Achaeans during this grim time. Their illusion and protective magic shielded them from the greater conflict, and for a time, they welcomed the humans to their hidden homes.


Tales tell of gods older than the Dragons that slumber beneath the earth, perhaps still pained by the woes of their creations. During this dark time surely they wept as the earth below cracked and the skies above blackened, the races of the world crying out. Perhaps they answered those cries, as then came into the world the first celestials; born of mortal women they were strongly resistant to the magics of the Dragons. They were warriors of Heaven and Earth, born to defeat the blight infecting Achaea.


And fight they did. The celestials of Heaven, the Etherium, and the celestials of Earth, the Infernal, came together and rallied the Achaean men and Dark Fae from hiding to create a mighty army. Led by the Etherium Lord Valorius and Infernal Lord Malagant the army tore through the Drakan hordes and one-by-one destroyed the Dragon Lords.  With only the Arch Dragon Lord standing between the world and peace the armies marched on his lair atop the mighty volcano at the center of the world: Karak’Tharn, the Dragon Maw.


The events that followed remain a mystery save for this: Atop the Dragon Maw there is a great lake of fire, and it was there that Valorius and Malagant met the Arch Dragon Lord in battle. No known soul yet lives to tell the tale of that battle at the peak, with Malagant the only known survivor. Valorius and the Arch Dragon have never been seen again. Infernal Lord Malagant walked down the mountain as King of Achaea, and it was a story would never pass from his lips.


Sadly the reign of Lord Malagant fared little better for the peoples of Achaea than that of the Dragon Lords. Malagant constructed a great fortress from which to rule, there on the slopes of Karak’Tharn, on the brink of Frosthowl Cavern, an ancient cavern leading through the volcano, and some say, as deep as the heart of the world. Malagant’s first decree was the execution of every celestial Etherium in Achaea. Thousands of Etherium were killed and the rest driven to hiding. Surviving Drakan were drafted into slavery, brutalized, and forced to battle to the death in gladiatorial pit fights. But civilization did progress during Malagant’s reign. Cities and towns were rebuilt, and for some, life returned to some semblance of normalcy despite the Infernals despotic rule.


As centuries passed Malagant’s public presence dwindled and eventually disappeared, a sinister noble class taking over the running’s of the government as the King delved secretly deeper and deeper into the depths of Karak’Tharn. The noble class ran the majority of the Achaean populace to poverty, perpetrating the practices of Malagant before them. But a people can only be tread underfoot for so long. A lesser noble of great virtue, Sir Barathios, rose up with the downtrodden peoples of Achaea and cast out the nobles before marching on Malagant’s fortress.


Within the depths of the fortress Sir Barathios, his peasant army, and his council of five mages overthrew the Infernal defenders and slew Lord Malagant. Whatever they witnessed below Malagant’s palace of ice, deep in the belly of Karak’Tharn, frightened them. So much so that Barathios’ council of mages remained behind, sacrificing themselves to ensure Malagant could never rise again. The stronghold was sealed off and left to the frigid cold of Frosthowl Cavern. Sir Barathios became King and built a new palace in the heart of the new capital of Achaea, near the base of Karak’Tharn: Achaeos.


Eight years have passed since Malagant’s fall. The Etherium and even the Drakan have been pardoned and welcomed back into the arms of Achaean society. Dark Fae trade and roam freely in human lands. The Infernals guilty of great crimes during Malagant’s reign have been hunted down by Barathios’ new Celestial Guard, but the remaining Infernals, though still spurned and watched with a suspicious eye, were also pardoned by the King. For the first time in two hundred years the land knows peace, and its people prosperity.


Yet dark whispers tell of infernal magics and terrible creatures gathering in the shadows of Karak’Tharn. No word from the Frostguard stationed at the sealed Frosthowl Cavern in months. With no messenger its said, having returned alive. Further still up Karak’Tharns craggy face lies the ancient Drakan city of Karaz’Un where lights have been seen twinkling ominously in the night for the first time in nearly a century. The peak of Karak’Tharn hangs impossibly, like a great claw, over a bubbling lava lake. Its slope cracked and torn, giant slabs of earth ripped from their rest, somehow suspended to create floating islands in the sky. It was here the Arch Dragon Lord’s brood made their elaborate homes. And upon that vast bubbling lake of fire there is an ancient question still waiting to be answered, and that answer could shake the very foundations of the earth and awaken its slumbering god.


King Barathios has sent out a call for adventurers of all races and skill sets to join him in Achaeos and pursue the mysteries of Karak’Tharn under his sponsorship.
Posted by Monnster at 7:37 PM No comments: